The postpartum struggle is real 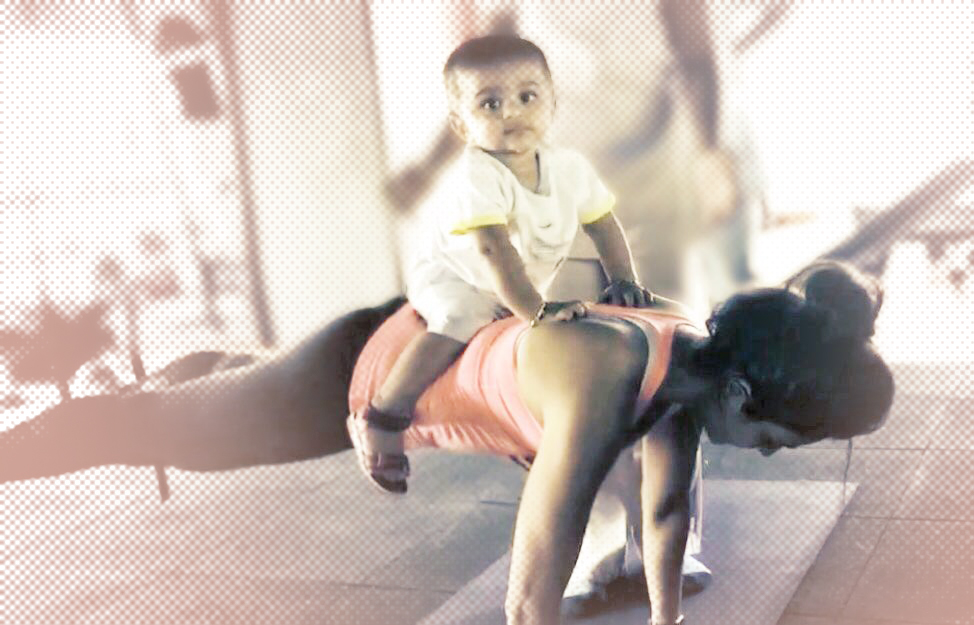 Six days a week in the gym, strength training on alternate days, 12,000 steps a day, no processed food; if you think that’s some kind of weight loss recipe, think again! That was my pregnancy fitness plan… and it worked. I managed to be the pregnant woman I always wanted to be: energetic, free of back pains, and generally unaffected by the fact that I was pregnant, except for having to trade a glass of champagne for a seltzer. I worked really really hard and it paid off.

The day I got admitted to the hospital, I did one last set of deadlifts and bid farewell to the gym. At the behest of my doctor, we had opted for a “voluntary” c-section, though it was more accurate to say that we didn’t want to fight the 80% odds that we were given that I would wind up having a c-section anyways. I knew what this meant: instead of a 10-day break from the gym, and being back in shape in two weeks, I would have to take four weeks off from the gym and be back in shape in eight. It was a tradeoff, but I was okay with it. We were blessed with our perfect baby boy, and I was happy to let everything else take a back seat for a while.

The second I met my son, I was overcome with a sense of euphoria unlike anything else I had experienced before. As the days went on, however, that euphoria quickly turned to exhaustion. The visitors kept coming, I stayed awake night after night for just a few scarce hours of alone time with my son, and it all took its toll when I left the hospital in so much pain that the procedure could have happened just that morning.

When we got home, visitors continued to pop in at inopportune times, family wanted to “play” with the newborn, and just a couple weeks later, with my stitches still completely raw, I had to sit with my husband and our newborn for multiple functions to celebrate his arrival. Amidst everyone else’s jubilation, my exhaustion went from bad to worse, and my incision continued to throb like a fresh wound even as the weeks wore on.

At five weeks, when I was cleared to start doing a little walking, but couldn’t, thanks to the searing pain I felt every time I walked more than 20 steps, I finally spoke up to my doctor, who flatly responded, “Maybe your pain tolerance is just a little low. Let’s wait a few more weeks.” At eight weeks postpartum, when I still struggled to walk normally, my hopes of doing burpees by week four now seemed like some absurd fantasy. Again, I was met with the same response- the problem was still apparently my threshold for pain.

At this stage, the physical pain, excruciating as it was, wasn’t the worst of it; it was the disillusionment and disappointment of what postpartum life really was. I had devoted years and years to making my body strong enough that it could handle anything, and then nine months of my life to making sure that my body could grow and nurture the healthiest baby possible while being minimally affected. I just couldn’t understand why, after all that, I couldn’t even walk up a flight of stairs without wincing with every step. I even weighed more three months postpartum than the day I left the hospital, and my previously toned muscle had given way to piles of mush. I had swapped stretchy pants and maternity clothes for my real wardrobe, and there were days that even the maternity clothes seemed a little snug. This was neither a life, nor a person I recognized.

It took another couple of weeks of self-pity before I finally saw a different doctor who sympathized with the injustice that I felt. With a combination of treatments, I could walk a little taller, and sit down and stand up a little easier. Within weeks, the constant rawness was reduced to little more than a twinge. A couple of weeks later (and 14 weeks postpartum), I was finally able to make it back to the gym.

As much as I would love to say I got back into my routine, and instantly lost the weight, that’s not how it went. Starting to work out again was just the beginning of a whole new journey. My body didn’t know how to move like it used to, I tore a hamstring from overtraining with bad form, and I constantly felt like I had no idea what I was doing, and was making absolutely no progress.

But day after day, week after week, I kept at it. Some days the most I could do was a walk, other days I felt really strong and could start doing some of my high intensity movements again, and then there were days that I felt like my body just wouldn’t do anything I wanted and I would burst into tears mid-workout. The only thing that was always the same was that I had learned the hard way that things were just different now. There was no point in planning for or setting deadlines, or comparing things to the way they were before- I just had to go with the process. I tried all kinds of different things to just regain a sense of how I moved again- boxing, yoga, pilates, sprinting, swimming walking… I did it all, and was just grateful to be able to move!

Very very slowly at first, and then all at once, the changes came. But something else happened along the way too: for the first time in my life I truly took the time to get to know my body, how it operated, and to understand what it needs and what it doesn’t. When we give our bodies what they need, they have a funny way of always coming through for us. The more this happened, the less I cared about the visible results, but the more the results were visible!

So for all the moms out there who are determined to “get back to” their pre-baby body, my suggestion to you is to forget about your pre-baby body entirely. If postpartum life is anything but normal, why should you expect your body to be? Stop comparing, start from scratch, and get to know, love, and work on your “new normal” body. Do what feels good, get active in ways that make you happy, get exercise with your kids (my son usually comes to the gym with me), and, above all, be really proud of what you have accomplished because none of it is easy. If you forget about your pre-baby body and consistently focus on wearing your new body and life with pride, you will find your happiest, most confident self yet!